Rob, I am so happy you exist. This cuesbey stuff is really coming along. I made a complete In- and Out- list from six weeks of changes for an upcoming article (coming out in the next 48h sometime), and your site was a massive time saver.

It's really great that you can bookmark a list for a comparison now. Looking forward to watching this one evolve!

Hi Jason, just noticed you are not running Vinelasher Kudzu. I feel like it is a card that would work out wonderfully in your cube. Have you tested it yet? (reference)

Staff member
Hi Vince, thanks for the suggestion! I have not tested that card, but I'll put it on my list. Great flavor text!

It's a colourless Zombie that also lets you jump up to a six-drop on turn 4 with Birthing Pod!

Staff member
That's a pretty solid suggestion Dom. It'd be my first Morph card, which is uh... well, one is the loneliest number, especially for morphs. But I do like it. 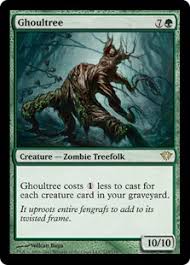 Uh, so this card exists. Anybody have experience with it? Zombie + Treefolk? murmuringCrawler.dec? I feel like I'm priced in here.

I like it. Obviously most of the Zombie support is going to come from red, but finding ways to tie it into other colours can only help.

Given that you have 20 fetches and presumably a ton of other activated abilities, what about Rings of Brighthearth?

Here's my favorite gem (Though more narrow than you might be looking for): Zombies Drafter: Come on. Throw it back at me. I dare you.
Maybe it's not so bad at 360, but I've always wanted more discard available for black, since it's the color's main form of interaction other than removal.

You were looking at ways to tie your blue section to the sacrifice/pod themes, so I suggest lots of clones: the interaction with undying/persist creatures is second to none, and they also help you jump up the pod chain (Though only if such a creature is already in play)

Depending on how amenable you are to proxies, Shadowborn Demon looks promising, from the M14 spoiler.

Krenko, Mob Boss is a card that has been preforming admirably for me: Feeding Eldrazi Monument, Providing Red decks with inevitability, and being generally a better curve topper than I expected him to. Shoutout to Kranny for the suggestion on him.

Pyreheart Wolf performed well for me before I added the pods, he's been excellent afterwards.

The red deck might not really need the help but, Brimstone Volley. My god.

Lastly, While I recognize that your multicolor sections are REALLY right (3 cards each, how do you live?!?!?), Voice of Resurgence seems like it would perform well.

Staff member
Hi Chris, thanks so much for all the great feedback!

Regarding specific cards (the linked list is perhaps out of date):
Brimstone Volley is in the list and has been performing wonderfully. I really love the Morbid mechanic.

Pyreheart Wolf has been on the border for me. My current red 3-drop section is:
Chandra's Phoenix
Hell's Thunder
Manic Vandal
Tuktuk the Explorer
All the cards there work pretty well with my themes already, but I'm certainly open to arguments.

Voice of Resurgence is in for Gattock Teeg as soon as I get my hands on a copy.

I'll give Krenko a test. My only real experience with him is in a Minimasters tournament, so that hardly qualifies as good experience. Most of Kranny's finds are a little light on power level for my cube, although they are good discoveries. That is perhaps one of the benefits of running a lower powered list.

I do like Oversold Cemetery. Despite the Gravecrawlers though, I don't really have much of a graveyard theme at the moment. It's an area I plan to explore, and I always love these techy suggestions.

Shadowborn Demon is an interesting curve-topper. I like that it's synergistic, and not just brute force. I'll hold out for a real copy though.

Wakedancer is pretty sweet. I have it lined up for my next cube project, and is currently competing with Pawn of Ulamog. I'll give it a test!

I could see hell's thunder for Pyreheart wolf. I've never been a huge fan of hell's thunder, since it's not really a creature (mostly a sorcery, I put keldon marauders and hellspark elemental in there too)

As a spell it seems fine, mostly being pulse of the forge with flashback, but it probably shouldn't be counted as a creature in the same way maze of ith doesn't really count as a land in your deck.

i love pyreheart wolf, i think it's worth a try. it's just a good card

countryside crusher, cunning sparkmage, staggershock, sulfuric vortex, seismic assault round out my red 3's (excluding a big gold section). crusher is all kinds of fun but can be frustrating when you need to hit another land drop and cannot. sparkmage is sweet, cube should have at least one pinger effect!

i dislike hell's thunder, not sure what to think of vandal / phoenix / tuktuk. how have they been playing?

Really surprised you guys don't like Hell's Thunder. He's everything I want in a red aggro deck, and works amazingly with sacrifice effects. It's pretty much a perfect fit, mechanically speaking. These sorts of effects are perfect in the Carrion Feeder / Goblin Bombardment / Blood Artist decks.

Nobody blocks him, so you get free haste damage, then you set up your plays to profitably get a 5/5 (e.g. Innocent Blood, Fleshbag Marauger, Birthing Pod, Cabal Therapy).

Staff member
Chandra's Phoenix is also a fun recursion creature that is one of the few evasive sources of creature damage red has. Sequencing your plays to rebuy a phoenix is great fun.

I swear I posted this before so apologies if I'm repeating myself, but now that you have 20 fetches, 4 Wastelands, and presumably lots of useful activated abilities, how about Rings of Brighthearth?

Staff member
Yes Dom, I've seen that suggestion before. It's on my list to pick up in my next order. For my weekend draft I'll be testing the following changes:

I suspect many of these cards will find their way back into the mix, but that's why they call it testing.
T

Out of those, I'd miss Plow Under the most. It's one of the best cards green has to disrupt the flow of the game.

Now that you play morphs, you should consider Willbender. Just last week I redirected a Sarkhan the Mad dragonmaking activation, which won an otherwise lost game...

Staff member
Plow Under is definitely the objectively stronger card. Just need to see how Primal Command fares, especially with all these Gravecrawlers running around. Half a Plow Under + tutor a creature isn't too shabby either.

Poor Ash Zealot Accidentally Hosing the Gravecrawler deck.
Interesting to see Reckoner and Blasphemous Act coming in. Is that more for funsies, or was there a specific impetus behind that?

zombie cutthroat is just terrible :[ people would tell me it was droolworthy in OLS draft and even then it was a bad, bad card

Staff member
I'll give Tombstalker another look. It's one of those cards that is "bad" by conventional cube wisdom, but, I'm pretty far from conventional at this point.

Zombie Cutthroat was a suggestion for jumping from 3 to 6 with Pod. I am skeptical, but that's not going to stop me from testing it!

I would advise anybody running Char to just straight swap it for Brimstone Volley. Power level is close enough, and one of them is just a much better card design and leads to better gameplay.

hehe, if you're dumping enough stuff in your yard for sewer nemesis and gravecrawler and goyf to be good, well...

yeah i hate char, at least psionic blast had the good grace to be absurd and anachronistic.

Staff member
Well, this whole conversation is really getting me excited to make a more graveyard-focused cube, but I still need to finish churning out that Eldrazi-Domain monstrosity first.
You must log in or register to reply here.
Top