Yep, I'm baffled by you people. Discover is so... spectacle-y. It's actively part of the reason why I stopped playing Hearthstone (alongside getting screwed by the internal economy and the fact that it feels pointless to play card games without human contact).

Which is a shame, because I did rather enjoy shuffling additional copies of cards into my deck. Hence liking Toralf.

spectacle-y? Can you explain what you mean by that @LadyMapi?

It feels like it's a mechanic designed to be more entertaining to watch than to play with/against.

I'm clearly in the minority here, though.

Discover is one of the few ways to introduce actual truly novel decisions into a game. You can plan for what's in your deck, you can make a bit of a plan (Meta game wise) for what's in your opponents deck, but when you're just getting cards from the game writ large? That's something you can't write an article about, you kinda just have to figure it out.
I can 100% empathize with "My opponent had 3 outs in all of goddamn magic and they hit it" though

Anyways, can we all agree that if you're running the Alchemy Esika's chariot, you run it with the updated art?

Chris Taylor said:
Anyways, can we all agree that if you're running the Alchemy Esika's chariot, you run it with the updated art?

Will do, although I'm going to keep with the normal catcar for the time being.

I just wanted to share the joke, I'm making a new catcar with the nerfs in place to help differentiate

I agree, there's usually just way too much value added to discover/invoke/conjure/whatever. And it ruins having the ability to play around certain decks and having player knowledge of decks. I like the idea, I think Conjure a specific card is better. I don't like spellbooks and conjure "non-collectible better cards".
I mean Hearthstone for awhile had, 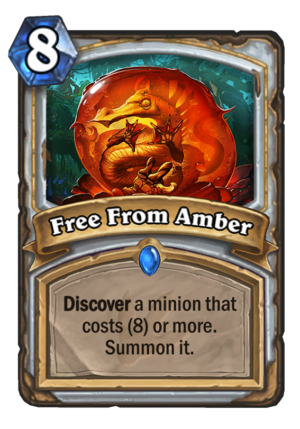 And it was so gross, that I just played two of those in my Reno deck for Standard. There was no reason to play 8 drops outside of Legendaries. It was a fun deck, but it was absolute suffering for my opponent. (I should know, I got a friend request only to get cursed at for awhile for playing a 'meta' deck. Then I told them that my list is different cuz I also played Mind Control for the inevitable mirror ).
To be fair though, this is probably one of the best discover card that Hearthstone ever had outside of pre-nerf Drakonoid Operative (which I also played in that deck, because steal a card on a THICK body is stupid)

But anyway, Alchemy looks fine, nothing this egregious, I just have a lot of negative opinions on conjure even though its fun for the player.

It was that gross

Onderzeeboot said:
I might be missing something, but Oglor doesn't draw, so it's a really mediocre flip-Jace impression in my mind. It's borderline broken with Tortured Existence though. If you keep swapping the same two creatures, each you spend will create progress more Zombie tokens!
Click to expand...

Oglor doesn't draw, but he dumps cards in your graveyard and lets you improve the quality of your draws. The power level is not quite as high as a looter, but it lets you look at just as many cards overall, and does so passively, which I really like. It's stupid good with so many cards too with that second ability, like Tortured Existence like you mentioned but especially with card-that-does-not-need-help Recurring Nightmare.

This could work in paper, memory issues aside. I seriously like the effect, it reminds me of a Magma Jet but with more potential upside, encouraging you to build your deck more around spells. It's rare to find a burn spell that not every red deck wants equally in cube, making this a compelling glue card.

Speaking of archetype support, Godo Jr. here essentially draws you a card every turn, and does great support for multiple archetypes, even allowing for equipment and artifact decks to come about even if you didn't see as many as you wanted during the draft stage. Drafting a card from a spellbook is still clunky -- even though it'd play much worse, I'd prefer it even to just give you one randomly than picking from three -- but I'm seriously trying to envision playing this card "properly" in paper cube and with custom reminder text...it's feasible.

There's a new Tibalt too, which is nice.

Electrostatic Blast is an amazing design. I love it.

EDIT: This is a cool card, and I want to make it work in paper: 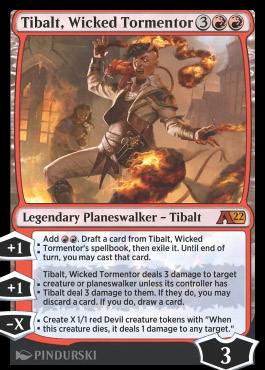 I think a re-worded version of this that exiles cards from the top of your library instead of drawing from a spellbook (and maybe dropping the rummage text from the second +1 to balance this change?) would be a really cool Cube card. This seems very good for red Midrange decks or as a curve topper for slow aggro.

I had been thinking the same thing, but the middle ability was a series of logic gates that my just-off-of-work mind had not been able to grok properly.

And red 5s are right next to white 3s as the most competitive spaces in cube.

I love that we get another playable and interesting Tibalt though!!! ....even if we don't, really..... 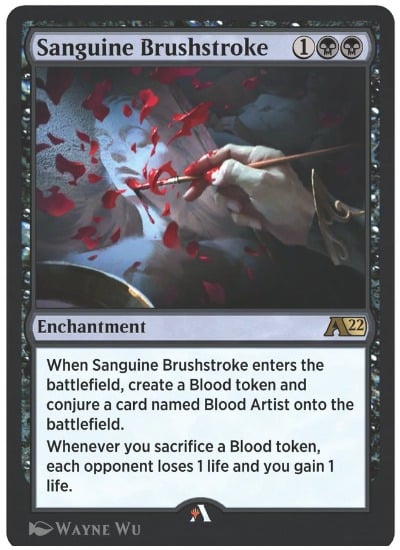 I will take three copies. One for myself, one for my portrait, and one for my french girls.

I will take three copies. One for myself, one for my portrait, and one for my french girls.
Click to expand...

Be still my beating heart!

I think this is the last of them, but wow, these are great. The Axe lets you draw a card with damage, and while it doesn't give any power or toughness bonuses, it also guarantees that the card is a spell. Seek doesn't really work in paper, but in a cube environment where you don't have to worry about cheating as much, it's not entirely unworkable to treat a library as a randomized space.

The Wickerwing Effigy doesn't require any considerations for paper, which is pretty strange. It's not too different from Donal, Herald of Wings or Nightmare Shepherd in terms of how it mechanically functions, and memory issues can be resolved with a bead or a bird counter of some sort to signify the effect. What I like most about this card is that it's actually the only card that lets you play creatures off the top at 3 MV without an extra requirement, and lets you do so in any color. We don't often get such an interesting and competitive design on artifact creatures at the lower MVs, and by being able to be played in all sorts of decks, this scarecrow opens up interesting archetypes and lines of play. The downside on the effect is real, but you have complete control of whether or not to use the ability, and its 1/4 body is great against aggro.

I'm really leaning towards printing out a few of these cards, as much as I hate to do so practically and aesthetically. As the great poet Billy Ray Cyrus once said, "much to think about".

If we want to use Seek in our cubes, we could

1. Note the top/bottom cards of the library that is known (Condemn Brainstorm)

3. Reveal cards from the top of the library until a card that a legal is revealed (with Soulstealer Axe the legal card must have mana value equal to the damage dealt)

4. Do with the seeked card as required (possibly put it into your hand)

7. Put what remains of the noted cards on the bottom/top of the library so they are where they were when they were noted
Last edited: Dec 8, 2021

Tbh I almost like the idea of making a generic Seek pile or a cascade pile. Maybe just using the unused cards from the cube would be enough? Seems like a fun idea for a custom cube. Brb, making it. 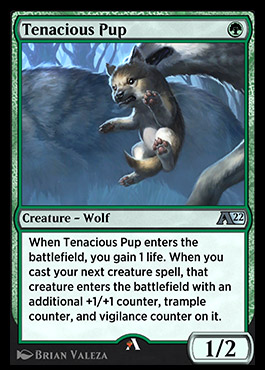 The reason that this one is digital only is because the "when you cast your next creature spell" clause sticks around until you play a creature, regardless of when you do so. This feels like an incredible aggro enabler, since simply curving out pretty much puts you ahead of the curve.

The mechanic I honestly want to get working in paper is "perpetually". I think you could handle it with transparent inserts that you could slip into the sleeves, and a rule that you have to reveal any cards that have gained a perpetual boost that are in your hand.

So, for example, let's say you're running this cycle in your cube:

You'd play Leonin Sanctifier (for example), reveal the Brushwagg in your hand, and slip in a little transparency saying "Lifelink".

@LadyMapi
If you find a way to create/buy custom inner sleeves, please hit me up.

I think you could do it with a bit of clear, thin plastic — like, just take some cheap penny sleeves, write on them in sharpie, and cut them down to size.

Given how weak D-Tutor is in my cube, this might just be find translated to "search"

LadyMapi said:
I think you could do it with a bit of clear, thin plastic — like, just take some cheap penny sleeves, write on them in sharpie, and cut them down to size.
Click to expand...

Penny sleeves…are they the see-through inner sleeves that we all use inside our normal sleeves?