Chris Taylor said:
For people who love Fiend Hunter: Is Banisher Priest better? worse? I like the cleaner wording, but is that a net nerf?
Click to expand...

The power/toughness change is more important. Banisher Priest fits a little better in the aggro deck, but is significantly worse against aggro. It can remove one creature, but can only trade with two-power creature (unless it has first strike, which is quite common). That makes it more of a tempo play. Fiend Hunter is a better stabilizing play, since it can block a two-power creature indefinitely.
M

Chris Taylor said:
For people who love Fiend Hunter: Is Banisher Priest better? worse? I like the cleaner wording, but is that a net nerf?
Click to expand...


You can't do any flicker or sacrifice tricks to permanently exile the target anymore with the new wording, so that would be a downgrade i guess.

I like imposing sovereign, but I can easily see it being not that great. Blind Obediance can sometimes be a little awkward, and being a nonevasive two drop isn't doing it any favors.
As for seismic stomp, have you tried falter? IIRC this is a technical reprint, so if you want two

Staff member
Really stoked about Imposing Sovereign! I love a good hate bear that can rumble in the red zone, and while nobody's going to argue that 2/1 body is meaty, making all of your opponent's dorks come into play tapped is nothing short of savage. To me, Sovereign is to Blind Obedience what Thalia was to Thorn of Amethyst. They both take a global, wide-ranging effect, and move it off of a do-nothing artifact / enchantment and onto a beatstick that can attack for two. In most cube matchups, I'd wager a guess that messing with your opponent's creatures will be more relevant than messing with their noncreature spells.

Chris Taylor said:
I like imposing sovereign, but I can easily see it being not that great. Blind Obediance can sometimes be a little awkward, and being a nonevasive two drop isn't doing it any favors.
As for seismic stomp, have you tried falter? IIRC this is a technical reprint, so if you want two
Click to expand...

I had really thought that Falter was 2R, but WHOOPS.

And Eric says it for me, 1W 2 power guys that affect tempo are very interesting to me. I wouldn't be as interested in a (say) WW first strike 2/1 I think

Yo Jason! I Finally get to try out Goblin Bombardment ... I mean Barrage of Expendables. Not as good since its got an activation cost but Im still excited to give it a try.

Yeah, bombardment was a card Eric's cube and aristocrats standard decks would have liked. Now who knows! That's a lot of R.
More gargadons!

Staff member
Hmm... that activation cost is super inefficient. Bombardment goes in tap-out decks that sac things at instant speed in response to removal or to finish off the game. Charging may well make it unplayable.

And I assume everyone feels lukewarm about our new reassembling skeleton 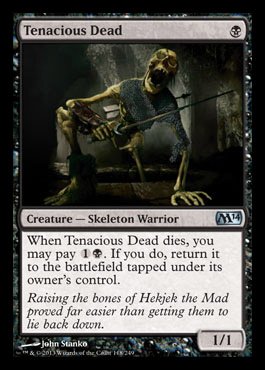 Or you could run a second Reassembling Skeleton :eek:

Jeeze why can't they all be zombies eh? I just wana see my gravecrawler forever.

I've got a cube for that.

i second mr. chan's burning enthusiasm for IMPOSING SOVEREIGN. that one's coming in and never going out. what a card.

legacy-wise the new merfolk is insane, but i wonder if it could be a cube thing too.

that bombardment variant is horrendous

i do not know why they've printed the new tectonic edge, which is basically as good except that they get a time walk

Eric Chan said:
Really stoked about Imposing Sovereign! I love a good hate bear that can rumble in the red zone, and while nobody's going to argue that 2/1 body is meaty, making all of your opponent's dorks come into play tapped is nothing short of savage. To me, Sovereign is to Blind Obedience what Thalia was to Thorn of Amethyst. They both take a global, wide-ranging effect, and move it off of a do-nothing artifact / enchantment and onto a beatstick that can attack for two.
Click to expand...

I like this analogy a lot. I'll probably steal it for an article.

i want to believe that imposing sovereign will live up the the talia analogy, but i have doubts.
talia's first strike is really crucial because it keeps her from simply being traded off immediately by any dork lying around, not to mention her force spiking is better than this psuedo kismet anyway
my gut read is that she will likely earn her slot in my cube, but will be far from a beast and will often be a coinflip to impact the game or even come away looking better than a mistral charger

i think part of the problem with blind obedience is that it was an aggro card that was also a durdly enchantment that didnt swing for two -- maybe one at the cost of a nice curve-out. give this guy a shot

the pyromancer of course makes me as randy as the rest of you. COULD THE CYCLE BE COMPLETE?

Staff member
Savage Summoning gives me some serious deja vu. Have they printed a variant of this card before?

Staff member
Interesting that there are no dual lands in M14. I guess they don't want two straight years of perfect mana in Standard (or are trying to make people buy whatever lands are printed in Theros). anyone looking for a more positive spin on m14 should check out the unparalleled BBD's preview on SCG -- http://www.starcitygames.com/article/26452_Beasts-And-Archangels.html

So in order, what do we think of
Mindsparker (The red 3 drop hate guy)
Dragon Egg
Academy Raider
Gnawing Zombie
Zeypher Charge
Path of Bravery

Mindsparker: Punishing people for playing their spells at all doesn't make for fun magic so I don't think it's a cube card. It'll be barely playable in standard as it's a way for aggressive decks that can't play voice to fight Azorius Charm, Sphinx's Revelation, and Supreme Verdict. As a 3 power first striker it's good against Thragtusks for as long as that matters. Someone will literally die shortly after playing it in a casual game because it's the first red rare they ever opened and they didn't know any better but their table was vindictive.

Dragon Egg: I like me some red control and the best way for red to have a defensive creature is to threaten to be more dangerous if it's attacked. Still seems slightly weak even for my cube but for the excellent synergy with Pyroclasm. I hope Theros has a Pyroclasm but even if it does this thing won't rock boats. I will play it in limited because I always end up in controlling builds with red. I will be wrong to do that sometimes.

Academy Raider: 1/1 for 3 needs some serious upside to be worth it. How many cubes don't run Looter Il-Kor? Flashback is rotating so it's not even exciting on that axis. Probably barely playable in limited? I would say slightly more than Rummaging Goblin which was fine but far from great.

Gnawing Zombie: I like sacrifice effects but when they cost mana they have problems. Nevertheless it lets you get value out of chump blocking when you don't have anything better to do and repeatable effects can be quite strong even if they sound weak. I think because of its stats it won't be finishing people off for exactsies very often but when you get to do it it'll be grand. Solid vote for limited (obviously take Doom Blade first) but I can't see a place for it elsewhere.

Zephyr Charge: I actually like this kind of card for limited. Remember Dauthi Embrace? Evasion wins games. As long as you remember how much worse than Kitesail it is in the majority of games you'll be fine. It's relevant that you can jump several beasties to close out a game but that use should be valued below Sleep and its kin. I'll be picking it whenever I have Plummet and am in the colors because it's too sweet. Green probably benefits the most from giving individual creatures evasion, too. Anyway it's surprisingly flexible even if none of its modes seem impressive.

Path of Bravery: In most limited games this is actually splashable anthem with upside when you get to play it on time. It helps win a race if you draw it later although you probably would prefer to draw Pillarfield Ox in that case; not a stirring endorsement. It might push you a bit into the lifegain deck? I am not sure if the lifegain deck is a thing. Congregate makes this quite a bit better I think. I wonder if the lifegain theme changes the pick value of Divine Favor. It's tough to make happen with the only common lifelink in white being at 5 mana - playing black at least gives you access to Child of Night and Mark of the Vampire but you want to be green to play your Voracious Wurms... oh wait Soulmender is a card. Okay, it's pretty good in draft and pushes you into the lifegain theme. It still seems tough to assemble the life matters deck though, with none of the cards that give you a bonus for gaining life being common. At least you'll probably survive to play your cards?? I doubt the card is cubeworthy but it's probably worth trying. If you have a tokens theme you can gain a lot of life quickly which could easily turn on the anthem part. Might be a better cube card than Intangible Virtue just because it goes in more decks.

Path of Bravery got quite the endorsement on TSG/Eck's podcast by their guest simply for being a 3 mana psudo Righteous Cause, so I'm at least considering it.
go figure that the anthemn effect might be the gravy
I think I might like Mindsparker as just a french vanilla guy. I don't expect him to be spellshock most games, but if he shocks a player when they wrath me, that might be cool. It is only instant/sorcery, so the dude over there with Daru Warcheif isn't going to mind for the most part.
You must log in or register to reply here.
Top