TrainmasterGT said:
More art, these are mostly for Sagas:

The Kami War (Confirms a leak!)

The Life of Toshiro Umezawa

Hopefully, these have dispelled any lingering fears about classic Kamigawa not being represented. I'm really digging these Sagas!
Click to expand...

thanks for posting this art, it makes me really happy

ravnic said:
This 5-drop is a very strong 6-drop
Click to expand...

Sorry, do you mean that as in this combos super well with Village Rites, that it's super strong and would have been a 6-drop not that long ago...? Just curious! I would agree with both, for the record.

ravnic said:
This 5-drop is a very strong 6-drop
Click to expand...

That orange-reddish symbol on the right side of the middle of the card means it's worth 1 more mana than you pay.

Zoss said:
Sorry, do you mean that as in this combos super well with Village Rites, that it's super strong and would have been a 6-drop not that long ago...? Just curious! I would agree with both, for the record.
Click to expand...

Oh, I meant the latter. If you would've shown me that card without it's cost, I would've thought: "Well, it seems a little underwhelming for a 7-drop, and since it's a legendary mythic, it should probably pass as a strong 6-drop."

At least a few years ago. At this point, I am getting used to "let's just push the stats even more"-mythic-designs
B

if they keep trying, maybe someday they’ll make a 5 drop that sees play outside standard

Exactly. This doesn't even seem that strong tbh. It's probably very good in a lot of our cubes over here, but this is pretty suspect in higher power lists.

Maybe some of them would have if they didn't also keep printing more egregious creatures at the lower mana-spectrum as well.
That said, in modern, Ponza has had periods where they played Glorybringer and Elder Gargoroth, Primeval Titan is archetype defining, I shouldn't need to tell you that Yorion (and to a lesser extent Jegantha and Obosh) is busted, and in Legacy you have nic-fit players packing all kinds of crazy jank.
B

i mean don’t get me wrong, this is way way better than its predecessor, and way way better than many black 5 drops. it’s obviously pushed. but unlike Timeless Dragon, it has no alternate cost, and unlike Thragtusk / Titania, it doesn’t guarantee both value now and value later.

That second ability is just dying to be combo-ed with. Spreads a variant of the Reveillark combo into black (with limited uses barring lifegain)

(ignore the alternate costs pls )
B

alternate costs are a hell of a mechanic

blacksmithy said:
i’m waiting for wotc to start the next phase of the alternate reality game and have the time traveling ninja who’s been posting these “leaks” start an AMA under an encrypted reddit username that leads to a numbers station that leads to posters around the greater Seattle area asking “HAVE YOU SEEN THIS MAN IN YOUR DREAMS?” with a toll free number to call if you have
Click to expand...

Someone went back in time and stole a Samsung SCH-V200 in order to take a picture of a leaked card.

Something something combat damage indestructible

I'm amazed by the horrible camera technology that these leakers continually have access to. Perpetually stuck in 2004.

it looks like the card is a foil, which threw off their photo attempt

blacksmithy said:
thanks for posting this art, it makes me really happy
Click to expand...

Yeah, it's like WOTC saved all of the best art (both traditional and experimental) for this set .

It's really amazing to me how well they've been able to combine the old-school traditional Japanese art with the Cyberpunk stuff. I kind of thought the set would be half of one half of the other, but so far it seems like they've done a good job of integrating elements of both into the other in a way that doesn't feel intrusive (at least to me, I know some people may feel differently).


Onderzeeboot said:
Exactly. This doesn't even seem that strong tbh. It's probably very good in a lot of our cubes over here, but this is pretty suspect in higher power lists.
Click to expand... 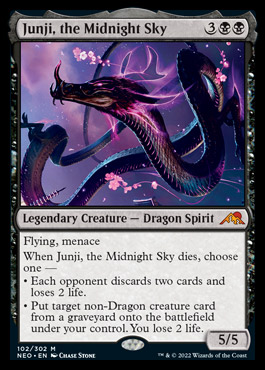 I heard you like reanimation, so I put reanimation on your reanimator target.

I want to try this card out, it doesn't look insane but it does seem like a decent finisher for midrange and control alike while having some nice graveyard synergies. Plus, it's a Dragon.

The big downsides here are that it can't reanimate dragons and that it doesn't trigger off of exile-based removal. Missing out on Dragonlord Atarka in Reanimator and Silumgar, the Drifting Death, Dragonlord Ojutai, and to a lesser extent Icefall Regent and Iymrith is a big downside since this card is most wanted by those decks. That said, it doesn't miss Hornet Queen, Apex Altisaur, or Archon of Cruelty, so maybe Junji does enough to be worth including.

Likewise, the "dies" trigger being blanked by Pacifism effects and stuff like Baleful Mastery means this can just be a 5-mana do nothing without the cool modal spell mode, which might be the nail in the coffin for this card. So much of this card's value is tied up in actually doing something when it dies that my removal suite might just mean this isn't feasible.

Which is a shame, because this card is super cool! Hopefully, the WUG Members of this cycle are costed a little more aggressively so they can have an easier time making it in. I don't think this is all that far off.

The problem with reanimating Junji is that you could just as easily cast it.

Feldon has been on the cusp of being good for far longer than he has any right to have been, but he's always just a little disappointing. Maybe this time...!!

he's plenty good with or without Junji, but it certainly helps!

As I mentioned above, also great with

Staff member
I feel like it almost has the problem Dom talks about where the stats are so big the synergies won't matter as much.

Velrun said:
The problem with reanimating Junji is that you could just as easily cast it.
Click to expand...

Is that really a problem? Fair reanimator decks tend to be midrangier than comboey so having a nice big threat to cast seems like an upside more than an issue.
B

Makeshift Mannequin is actually really good with Junji because the mannequin clause protects it from any of the ways you’d normally try to negate the death trigger (exile etc)
You must log in or register to reply here.
Top