sigh said:
Don't see why color count would matter. There are 5 color commanders already, so its not like giving a partner deck access to 5 colors is unprecedented. They could've just appropriately tuned her abilities for the mechanic. Like it affects me very, very, very little, its just grating to me. "Partner with" at the very least?
Click to expand...

Okay, so a while ago they said they could reprint these out of universe cards from Secret Lair as in universe reprints, right? So MaRo basically confirmed that when they reprint Eleven and Chief Jim Hopper as "real" Magic cards, they will have 'partner with' (each other): https://markrosewater.tumblr.com%2Fpost%2F665039043599450112

ok nice! Weird to me that they would use two different card texts, but my annoyance is (somewhat) sated.

Okay so technically this is different to partner with because they can all be partners with eachother, but not any other commander? o.O

Mind Flayer, The Shadow doesn't have "Friends Forever(tm)"? What a ripoff

OH this is actually a good magic card. Getting to investigate between two and four times for playing a 2-drop is a pretty good rate, especially in one of the color pairs with the worst access to card advantage. I will probably be picking one of these up once the Magic flavored version of this card drops.

sigh said:
ok nice! Weird to me that they would use two different card texts, but my annoyance is (somewhat) sated.
Click to expand...

Unfortunately the new spoilers kind of prohibit the 'partner with' solution MaRo was implying earlier.

The only card I like is the one which doesn't have the words 'Friends forever®' on it. Coincidence?

I don't think it is good - especially in 2-player. I think you could tack the words 'Trample' and 'Invulnerable' on it, and make it cost 5 mana and it still would be fine, but it is a kind of cool design.

They finally dropped the superdrop, and something annoys me: 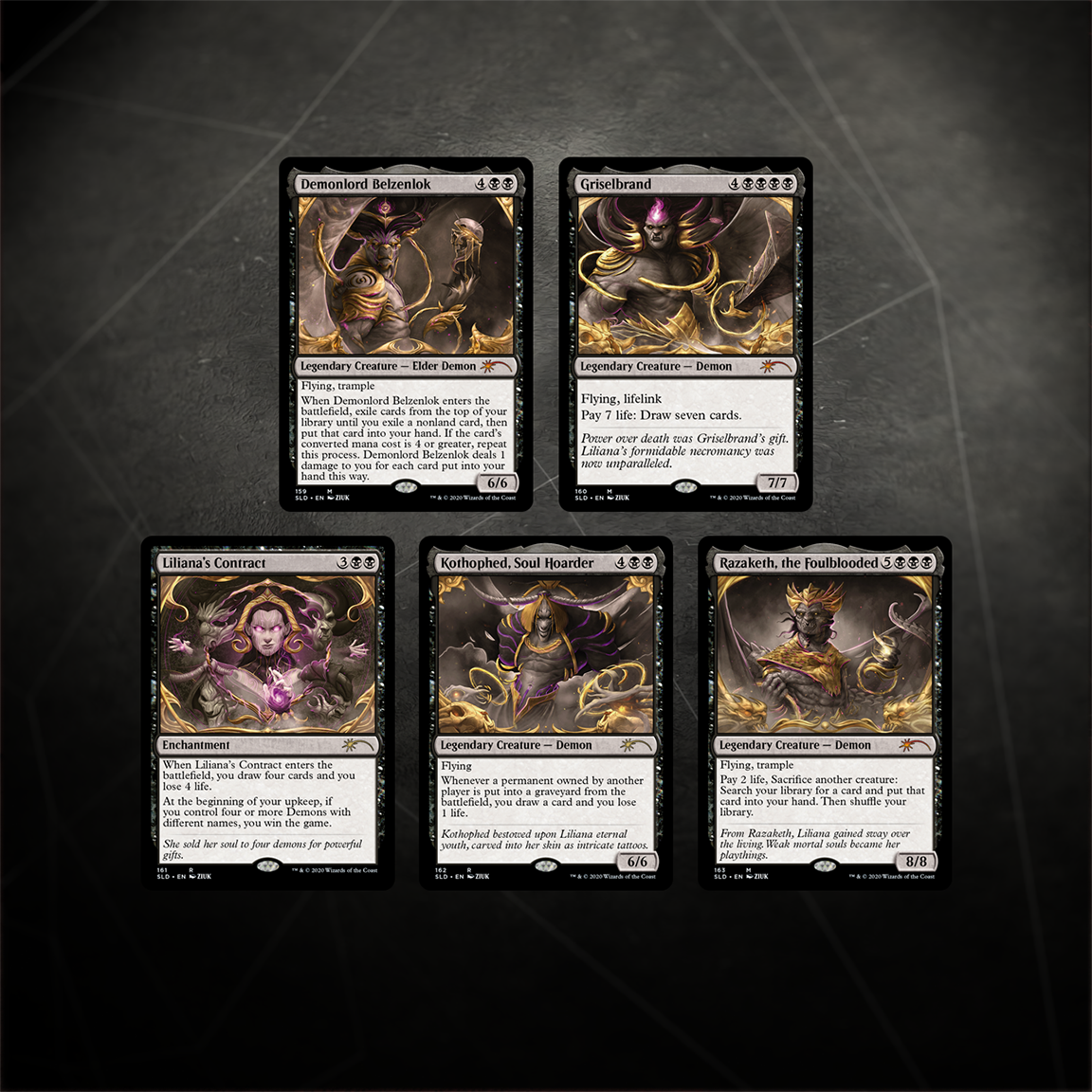 Belzenlok, why don't you have flavor text? I want to know what Liliana got from you, dang it!

This is the first Secret Lair I won't be buying anything from, but not for lack of trying -- I like a lot of the treatments here. I'll definitely need to pick up the movie poster styled Liliana, Death's Majesty as a single, though!

Happy that I'm not interested in any of the Stranger Things cards for cube more for the trinket text of "BFF" that will continue to exist on the cards in 6-8 months when the Magic-ified versions come out. Neat designs, but very obviously EDH cards, and that's fine by me. I'm not against other IPs in Magic at all, but I'm getting real cognitive dissonance from some of these early choices (and from the far-off styles of some of the secret lairs that are better suited for a personal alter instead, but I'm much more comfortable with them pushing boundaries on stylized versions of cards rather than brand new designs).

I would've considered some of the Walking Dead set if they were done in Magic style (and non-foil), particularly Lucille and Rick, Steadfast Leader. Glenn's cool but UW is too tight for that these days. The Norman Reedus one I would've been fine with without needing Magic flavor; if only it was better!

I am still planning to get the Nature’s Lore

And I will probably get the Lord of the Rings when it arrives.

LotR won't be a Secret Lair but a whole set.

Am I the only one that is put off by the absurd stats on little kids? Was it impossible to find interesting designs for 1/1s or 0/1s? I thought the reason for those being mechanical new cards was that they wanted to do perfectly fitting top down designs. Aren't stats part of this in the age where a Beloved Beggar can take a hit from Tovolar without dying?

Now that you mention the 1/1 and 0/1, Wizards should hire you. This was the set for the small stats.

I'd take that job. And make a my own set. With Madness and Cycling.

A little slow but still a cool set of effects on this one.

That’s a really cool land and as a transform card is also feels pretty unique.

Were these going to get a ‘normal’ Magic card in the near future or are we stuck with Stranger Things names if we want these cards?

Were these going to get a ‘normal’ Magic card in the near future or are we stuck with Stranger Things names if we want these cards?
Click to expand...

Definitely agree. Really like this land for my artifact cube. It's a little slow but I thnk it's got some really fun play to it in that environment.

Pretty sure they're doing all the new ones as regular cards. I think the Walking Dead ones *are not* slated to get that treatment though.

Soon or not is of course, a matter of mystery

Morphling said:
Definitely agree. Really like this land for my artifact cube. It's a little slow but I thnk it's got some really fun play to it in that environment.

Pretty sure they're doing all the new ones as regular cards. I think the Walking Dead ones *are not* slated to get that treatment though.
Click to expand...

This surprises me a little bit although I like the news. Will they keep doing transform cards in the upcoming sets? I thought it was only this rotation.

Or the land will arrive in Crimson Vow (already) which would be pretty cool. It would be nice of Wizards to already give us both options and Stranger Things suits Innistrad better than the upcoming sets does IMO.

Morphling said:
A little slow but still a cool set of effects on this one.

I seriously like this card but I'm going to have to pass on even the MtG-flavored version of it because drafters will have to flip it to know what the hell is on the backside. A reanimation effect isn't wanted or needed in many decks, and won't be worth the work of timing 6 mana of clue sacrificing often times (unless you're sacrificing without the card draw with another card, in which case, you're good enough at Magic to not be a concern about this).

This means drafters will need to take the card out of the sleeve to know what the hell they're transforming it for, which is necessary for the inclusion of the card over something like Bonders' Enclave or Geier Reach Sanitarium. At least on Westvale Abbey (which I sadly don't run any longer for its narrowness), it indicates it turns into a big monster.

Besides, I really really like "Investigate" to include the reminder text because it's not the most obvious or common keyword in the world.

If you want innistrad (still no reminder text) Hawkins
You must log in or register to reply here.
Top