Last month I gave my initial impressions of Android: Netrunner, wherein I introduced the basic ideas of Android: Netrunner and gave my thoughts after my inaugural 90 minutes with the game. Since then I’ve had the opportunity to play against a variety of opponents both on- and offline, and can now offer a fuller assessment of the game’s design.

One of Netrunner’s marquee selling points is that it is a non-collectible game. The core set and subsequent expansions come packed with a complete playset of each included card, eliminating the need to reach for your wallet whenever you wish to create a new deck or tinker with an existing one. Although this sounds like a universal positive, it does come with significant design baggage: the same product has to satisfy both beginners and veterans alike.

Android: Netrunner is a deep and complex game, often to the point of being intimidating for a beginner. Several cards were either misplayed or misinterpreted in my early matches, and I found myself ending each playsession to scour Google for clarifications on cards or plays that didn’t quite make sense to me. The problem is apparently widespread, as despite a rather lengthy rulebook and supplemental online FAQ from Fantasy Flight Games, many gameplay elements remained unclear. By contrast, a game like Magic: the Gathering is both more complex than Netrunner yet simultaneously more accessible. Wizards of the Coast have spent years lowering Magic’s barrier to entry, from the beginner-friendly “Duels of the Planeswalkers” recruitment program, to a pipeline of products designed to ease players into the more fully-fledged environments. I spend my days playing and writing about one of Magic’s most advanced formats, but I started with low-power decks that practically played themselves.

Netrunner is certainly better suited for learning under the tutelage of an experienced player, but for those without the luxury, I do hope you’ll power through, as Netrunner’s gameplay is both deep and rewarding.

The primary gameplay mechanics used in Android: Netrunner are resource management and bluffing via hidden information. The two mechanics blend to form an experience that is simultaneously tense and playful. Rather than sell you on the concept myself, I turn to the words of Richard Garfield, Netrunner’s original designer:

When one player knows something that another player doesn’t a world of game opportunity opens up. This opens the door to game theory – where there is bluffing and misdirection, and the play of the game can leap from the dry statistics of the rules into things like reading the opponents and smelling fear. At its best it allows a heady mix of intuition and reason that is hard to match. Hidden information is not appropriate for all games, but I never design any game without considering it long and hard.

Like luck in games, hidden information can increase the breadth of players that will play it. Whenever I learn a new game with no hidden (or inconsequential) information I know there are some players in my playgroup that will make that game a misery to play. They are not doing it to be abusive – but they can’t help themselves when the optimum line of play is there to be calculated. Even the luck of dice may not reduce their calculation – because they can always seek the probabilistically best move. But if there is meaningful hidden information they can’t overcalculate because they know that other people might be misleading them. And they also can make more arbitrary moves because they know that this may mislead the opponent.

I’m a statistician by trade, and people are often surprised to discover that I don’t enjoy games with complete information. If a game state can be solved, my brain yearns to solve it. The wheels turn and turn looking for an answer, and I can’t turn them off. This is immensely dissatisfying. I don’t play games to solve problems. I play games to play.

As Richard Garfield notes, one of the secret benefits of hidden information is that it can cut down on analysis paralysis. You can only process things for so long before you shove your chips in one direction or another. 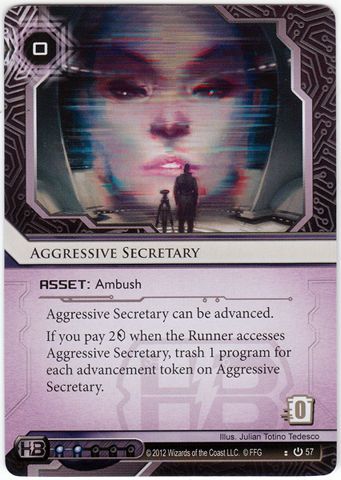 A key element of the design is that the card types Assets, Agendas and Upgrades are all played the same way: face-down on the table. With exception to depleting the Runner’s hand of cards, the Corporation’s only path to victory is “advancing” 7 points worth of Agendas. To advance an Agenda, the corporation spends one credit and one click (action) to place an advancement token on a face-down agenda. The above “Accelerated Beta Test” is worth 2 points and requires 3 advancement tokens to be scored. In total, scoring this agenda requires 4 actions: one to play the card from your hand onto the table, and three to advance it. By design, the corporation only has three actions per turn. Fully advancing an agenda almost always requires passing the turn back to the Runner with an Agenda on the table.

Such, the “safe” play is to first build up a defense of “ICE” to guard the agenda before playing one to the table. On the runner’s turn, he or she can make a “run” at one of your servers, which may or may not be home to an agenda. If they survive the gauntlet of ICE you have placed in front of them, the runner steals the Agenda and scores it for themselves. Of course, as the corporation, you can’t simply hold your Agendas in hand until there’s a well-guarded server waiting for them. No, Netrunner’s design is far too clever for that.

The Runner will run at anything that isn’t nailed down. As the corporation, a valuable tool against this constant assault is the power of misinformation. The inclusion of assets like Aggressive Secretary and Snare! in your deck allows you to disguise your intentions and slows the runner down by forcing the runner to prepare for the worst before attempting a run.

An Agenda that can be played and fully advanced in one turn. However, its benefit (giving the runner 2 tags) expires at the end of turn. Well designed tension all on one card.

This system of mechanics allows the player to imbue their play with an incredible degree of style. Like Poker, Netrunner is less a game of mistakes than it is a game of opportunities. Two players with different temperaments can attack the game with different strategies, even with the same deck.  An aggressive player bears more risk, but can get away with certain gambles that a conservative player cannot. And like poker, sometimes it’s best to randomize your playstyle as to not give your opponent the gift of free information.

Like all card games, Netrunner is host to its fair share of randomness. Netrunner takes a novel approach to variance management. The corporation and runner players get 3 and 4 “clicks” (actions) per turn respectively, and clicks can be used in a number of ways. At any point, you can spend one of your actions to draw a card or a credit from the bank. This is not the most efficient way to draw cards or earn credits, but the availability of these options smooths out the game enough to prevent the “pointless” games that can occur in other card games like Magic while still ensuring that duels play out differently from game to game. Best of all, Fantasy Flight Games has managed to create a game whose play is both diverse and consistently interactive. The game’s 7 factions (3 runners, 4 corporations) attack the game from very different angles, but the fundamentals of the game’s beautifully designed rules system holds it all together. The corporation must include Agendas in their deck, and the runner must find a way to steal said Agendas.

Android: Netrunner comes together to form an experience that is far more than the sum of its parts, and is hands down the most innovative and engaging new game I’ve played in the last decade. For a heady mixture of hidden information, bluffing and interactive resource management, look no further.