Haze of Rage in Modern

Jan. 16 Dom Harvey Comments Off on Haze of Rage in Modern

Welcome to the second of my series of articles about unexplored cards in Modern! Today we’ll be looking at this beauty:

Haze is a card with a ton of latent potential. The most natural reference is its more popular Storm cousin, Grapeshot; Haze’s damage output compares favourably. With only one creature connecting, Haze deals just as much, and when you add more creatures Haze’s damage output rises  fast. Multiple Hazes make it easy to deal lethal, and one copy of the card can become ‘multiple’ Hazes thanks to buyback. Grapeshot can deal with creatures sometimes, but for anything more impressive than just torching a Birds of Paradise you’re using enough of your resources that the opponent usually has time to rebuild.

However, there are good reasons Haze hasn’t put up results. Not only does it demand you play creatures, it demands you play creatures well-placed to be pumped by Haze. Those creatures tend not to be conducive to building Storm (other than by being cheap, which isn’t enough), so you have to find separate ways of upping your Storm count. The result is a confused deck, split between low-cost and low-quality creatures and Storm enablers, prone to very inconsistent draws. Solving that problem is key to making a competitive Haze deck.

Given that, it’s not surprising that we don’t have many well-performing Haze decks to look at. The only example comes from Time Spiral Block Constructed:

This deck isn’t a perfect case study, because it’s not a dedicated ‘Haze deck’. That’s part of why it succeeded, though; it was a serviceable R/G Aggro deck within the relatively low power level of Block Constructed, with the ability to randomly ‘go off’. Even the nonstandard cards could be deployed to further a ‘normal’ game plan: Summoner’s Pact could find Tarmogoyf against other green decks, and Uktabi Drake could break through ground stalemates and be a hasty threat against control. The deck could also shift plans: in sideboarded games control decks would be buried under Gargadon, Stormbind, and Storyteller, while Gargadon and Fatal Frenzy ensured the deck always had the biggest creature on board to punch through board stalls.

This highlights a requirement for Haze decks, a recurring theme in this series and in discussions of combo in general: either the deck has to have safe and regular access to its key card, or it has to survive without it. In Modern there aren’t any good tutors for Haze (I like Muddle the Mixture, but not that much) and all the good filtering is banned, so we need good substitutes for Haze to add redundancy.

We should also choose our creatures to best exploit Haze:

These two have had a long and happy marriage, and Haze gets on just fine with both of them. Empty feeds off the storm enablers in the deck, and Haze converts even a small Empty into lethal damage. Bushwhacker is even better than Haze, offering a rare and vital effect stapled to a Haze-able body. In the lists that run Bushwhacker, it’s often the best card.

Used to great effect in regular Storm decks, Electromancer is excellent with Haze alone (letting you Haze for R, or Haze + buyback + Haze again for 2RR), and even more so in Ritual-heavy versions starring Manamorphose. It happens to be a Goblin (‘Noggle Electromancer’ doesn’t have the same ring to it) which, as we’ll see below, is more relevant than you might think.

The Electromancer-Pyromancer-Rituals deck builds itself, but the youngest of pyromancers is a boon to more obscure Modern archetypes as well. The major weakness of the Nivmagus deck was that it committed all your resources to one creature, making removal a serious nuisance. Young Pyromancer lets you distribute the benefit of playing spells between multiple sources, giving you a more resilient board presence. This does mean that cards like Assault Strobe or Tainted Strike won’t let you OHKO, but that might be worth the tradeoff. Haze of Rage takes the place of Ground Rift as an eatable storm spell for Nivmagus that makes your Pyromancer tokens go berserk; it’s trivial to get a large Haze in this version, as you have the 12-pack of free Phyrexian mana spells (Gut Shot, Gitaxian Probe, Mutagenic Growth) to which you can add Slaughter Pact.

When I saw Akroan Crusader, I wondered if someone in R&D was a closet Haze fan. The card is perfect: you can play it on T1 to set up a T2/T3 Haze, and the tokens have haste so you can unload freely. The problem is that there aren’t that many good, cheap spells that target – only Gut Shot, Mutagenic Growth, and Slaughter Pact as free spells, though Wojek Siren is a nice mini-Haze that triggers Heroic.

Under the wide umbrella of ‘mana guys’, we find these. There’s not much to say about Emissary and Priest beyond the obvious (‘in case you couldn’t tell, they make mana and attack!’); they’re solid role-players here. Wild Cantor and Hedonist are a little different, accelerating you in a way that the others can’t; Hedonist in particular can act as a Seal of Seething Song, setting up explosive turns. I’ll mention Genesis Chamber here without further comment.

If you’re after red creatures with haste that can form a cohesive strategy between them without Haze’s help, you’ll run into Goblins sooner or later. So many of them have some incidental synergy with Empty and/or Haze: Legion Loyalist hastily helps your X/1s past blockers, Foundry Street Denizen becomes very large with Empty, Warren Instigator tacks another multiplier onto Haze, Wardriver pumps Empty tokens…

Mogg War Marshal has been good for me in almost any Haze deck against grindy decks in post-SB games, but it’s especially nice when you can make its tribal status relevant.

I don’t have much faith in this as the mana engine of a Haze deck, but it’s a virtually free way to light a fire under your good draws. Consider:

They make us work for our free hasty 4/3s, but thankfully the condition for returning it coincides with what we want to be doing. MTGO grinder Victor Jenny (SN: grapplingfarang), who has received some attention for his outlandish brews, posted this early last year: 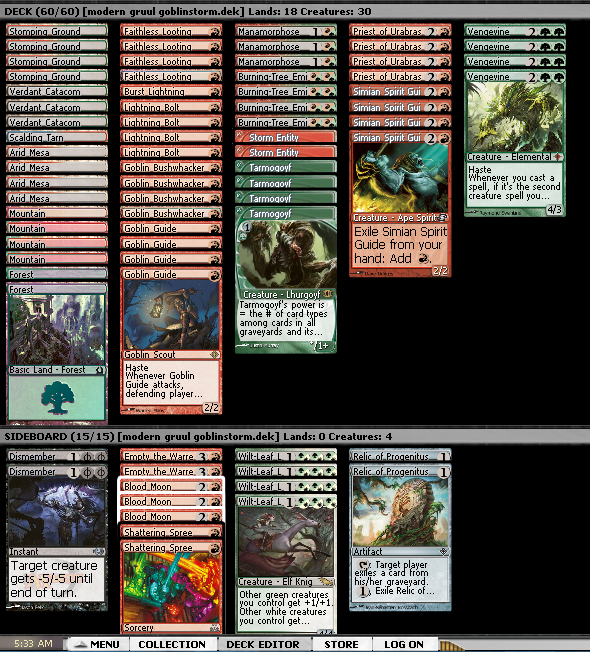 There are obvious similarities to the Block deck above, and drawing on ideas from both might help us crack the code: Camilluzzi’s Summoner’s Pacts get much better when they get to plumb the depths of the Modern cardpool, fetching both Burning-Tree Emissary and Vengevine. Consider a start like this:

Note the many angles of attack available to Jenny: Empty the Warrens can outflank an opponent relying on spot removal, and Blood Moon gives him a ton of free wins. Later iterations of the deck sported Myr Superion as a backup beater alongside Tarmogoyf to compete in ‘fair’ games. It’s unfortunate that Vengevine is no longer a definitive answer to attrition matchups thanks to Deathrite Shaman and Scavenging Ooze, but it’s still a fantastic card.

I’ll repost the graphic from my last article as a reference point: I’ve tried a lot of different shells, and many of them seem one card short of everything clicking into place. Perhaps that card is one that already exists; either way, I hope this has given you interesting food for thought. If you have ideas or feedback, contact me in the forums or on Twitter (@mc_usher).